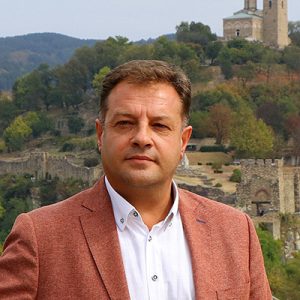 Daniel Panov (GERB/EPP) has been the mayor of Veliko Tarnovo Municipality
since 2011.

He was born in the old capital city.

In 1998, he graduated from “Vasil Levski” National Military University as a
machine engineer and until 2002, he built a successful career within the
Bulgarian army.

In 2002, after a publicly announced competition, he was appointed manager of
the established at that time “Tsarevgrad Tarnov” Municipal Company.
In 2009, he completed his second Master’s degree in Public Administration from
“St. Cyril and St. Methodius” University of Veliko Tarnovo.

In 2018 , he completed his PhD in a “Disaster an Accident Protection” from “Vasil
Levski” National Military University.

In 2009, he received the award of the State Tourism Agency for contribution in
promoting cultural tourism, on the next year, he received a personal award from
the minister of economy, energy and tourism for the management of
Samovodska Charshiya Architectural and Ethnographic Complex, and two years
ago, he was given the Tourism Manager Award by the Ministry of Economy,
Energy and Tourism for the Sound and Light Audio-Visual Spectacle.

In 2017, Daniel Panov received the award “Mayor of the year”. The competition,
organized by the Portal of the Bulgarian municipalities Kmeta.bg and the free
newspaper KMETA.bg, focuses on the work of all 265 municipalities in the
country.

In 2019, as a mayor of Veliko Tanovo, Daniel Panov received the official
document from 44th National Assembly of the Republic of Bulgaria, declared
Veliko Tarnovo as a Historical and Spiritual capital of Bulgaria.
In February 2016, he was elected chairperson of the Management Board of the
National Association of Bulgarian Municipalities (NABM), re-elected in February
2020.