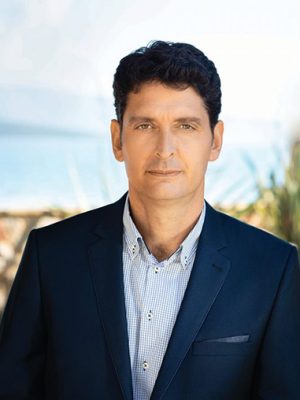 Mr. Haralambos Kalos was born on January 10, 1970 in Lefkada. He was raised in the
town of Lefkada, in the neighborhoods of Agios Haralambos and Agios Dimitrios.

He was targeted with his studies as a student, knowing very well what he wanted to
study and what career to follow. He was accepted in the School of Veterinary
Medicine of the Aristotle University of Thessaloniki. After receiving his undergrad
degree, he was accepted, amongst 16 other graduates from around the world, at the
University of Sterling in Scotland to specialize in Fish Pathology. In the framework of
his research and before receiving his Master of Science, MSc, in Aquatic Veterinary
Studies, he was able to recreate monoclonal antibodies of a specific bacteria, a
ground-breaking feat for its time. Although he had offers for an international
professional and academic career, he consciously chose to return and run his practice
in his hometown.

Mr. Kalos has been working since 1998 as a Veterinarian- Fish Pathologist for some
of the top companies in the field of fish-farming in Greece and abroad. He has held
high responsibility positions such as, Quality Control Manager, Head of Research and
Development, Manager of Production, and Manager of Programming and Production.
Realizing the changes in his field, as well as the new financial conditions, in 2008 he
decided to further his education with an MBA which he received with honors.

At the same time, from 1999 to the present, Mr. Kalos has offered his veterinary
services at his private ‘Veterinary Clinic of Lefkada’, alongside fellow veterinarian
Mrs.Konstantina Papachristou.

Since launching his professional career, Mr. Kalos has attended numerous
conferences, conventions, and training courses in his field of study in Greece and
abroad. Meanwhile, he is also a member of the Hellenic Veterinary Association, the
Geothechnical Chamber of Greece, the Advisory Commission of the Committee of
Greek Mariculture and of the European Committee of Fish Pathologist. This past year
he has volunteered as the resident vet in charge of the Rescue and Care Research
Center of wildlife, ARION, for the larger area of Lefkada.

Even as a student, Mr. Kalos was an active member of the local society. He was an
athlete of the Gymnastic Club of Lefkada in the 110 meter hurdles, a basketball player
with Doxa Lefkadas (and again with Ionikos Thessaloniki during his university
years), and a long standing member of the dance division of the cultural club Nea
Xorodia Lefkadas. In addition, he served on the board of Doxa Lefkadas and
Tylikratis FC. He is also a board member of the Association of Recreational
Fishermen Ligia-Katouna ‘San Petro’, as well as on the board of the local Bridge
Club.

During his undergrad years he developed a strong political interest in the student
movement, and later was a member and president of the Training Council of the
Hellenic Socialist Movement in Lefkada.

Mr. Kalos was a former member of the Municipal Council of Lefkada during the four
year term 2007-2010, taking over as vice president of the City Council, vice president
of the Mayoral Committee, secretary of the Municipal Utility Undertakings, and vice
president of the Athletic Organization. Although he was a council member for the
opposition party, he showed real enthusiasm for the local issues and took on a number
of initiatives, top being a complete proposal regarding the municipal fish farms and
the inclusion of the municipality in the ‘Blue Flags’ program after a four year
absence. Both proposals were voted unanimously.

Mr. Haralambos Kalos has been married for twenty years to Mrs. Konstantina
Papachristou. Together they have two daughters, 15-year-old Panagiota, a 1st grade
student in high school, and 12-year-old Susana, a 1st grade student in middle school.
Although Mrs. Papachristou isn’t from Lefkada, she has developed a very active
social presence in the local community which has become not only her new beloved
home, but her parents as well, who also live in Lefkada.

In his limited free time, Mr. Kalos prefers to be out in the element of nature he loves,
the sea, as an amateur fisherman or participating in an intellectual partnership game of
Bridge.